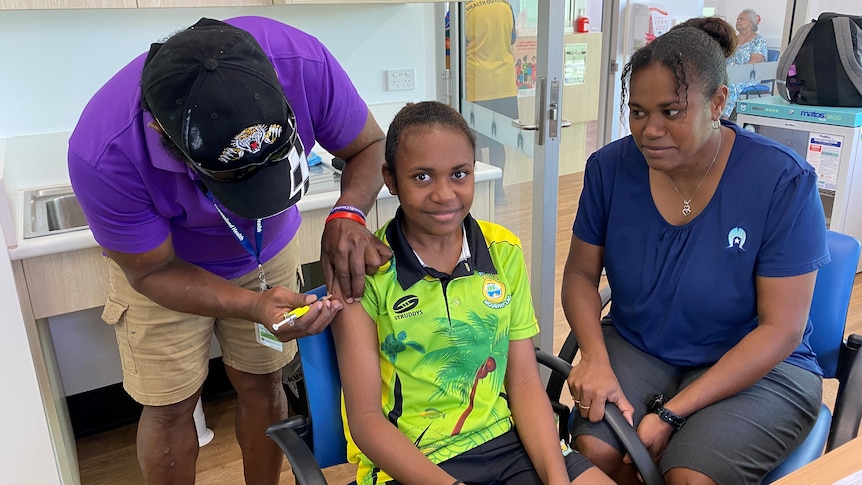 A health expert warns that tribal peoples infected with COVID-19 may be missing out on important treatment as reporting systems struggle to keep up with rising case numbers.

“If we look at the infections in NSW and the ACT, almost one in ten people infected by Delta was an Aboriginal and Torres Strait Islander,” he said 7.30.

“If we look at the severity in each age group, Aboriginal people were more likely to be hospitalized or end up in intensive care.”

But dr Agostino said since Omicron took hold, health officials have not had a clear picture of how indigenous people have been affected.

“Registration systems in most states are overloaded and because of this people don’t record indigenous status,” he said.

“We recommend in many settings that Aboriginal and Torres Strait Islander people receive certain treatments earlier and at a younger age, and without the system that identifies that person as Indigenous there is a risk that they will not have access to this therapy.

“This isn’t a problem with counting numbers and spreadsheets — this is about patient care, and it’s really compromised by a lack of action.”

dr Agostino said the indigenous health sector has for years required pathology companies to record indigenous status on pathology forms and forward that information to public health units, but many have yet to adopt the practice.

When it comes to reporting rapid antigen test (RAT) results, only Victoria and New South Wales have mechanisms for recording indigenous status.

Several Aboriginal health services have also reported shortages of RATs, despite long-standing calls for state and federal governments to provide the test kits to protect health workers and patients and reduce the burden of PCR testing programs.

A spokesman for the federal Department of Health said it was working with NACCHO to plan and prioritize “an efficient delivery” of RATs free of charge to Aboriginal community-controlled health services to screen their workforce.

LIVE UPDATES: Read our blog for the latest news on the COVID-19 pandemic

“Urgency” in the community to get vaccinated

With state and territory borders reopened, Omicron is testing healthcare systems and vaccination rates as the virus infiltrates the vast expanses of Queensland and the Northern Territory.

Native vaccination rates vary between regions and have actually exceeded rates of double doses in the broader population aged 50 and over.

“As a result, we haven’t seen the deaths that we feared, and this high level of vaccination has already saved many, many lives,” said Dr. Agostino.

But while some communities have almost all eligible residents fully vaccinated, in others most are completely unprotected.

There are now more than 120 cases in the Palm Island Indigenous community off the coast of Townsville, where only about half of the eligible population is double-dosed.

Aged care residents were evacuated to the mainland and a temporary morgue was sent to the island after a grim warning from health officials that the community could lose up to 60 people to the virus.

Local resident Harry Reuben said several friends and relatives have changed their minds about getting vaccinated since the outbreak began.

“I think a lot of people have been very reluctant to get their vaccine because of misinformation and past trauma,” he said.

“[Now] There’s a sense of urgency in the community and people are lining up to get the vaccine, get swabs and just do their part, which is a very encouraging sign.”

Similarly, in the Northern Territory’s central desert community of Yuendumu, double-dose rates have risen from 35 percent to 65 percent since the first COVID-19 cases were detected there two weeks ago.

“I have seen how hard the elders and parishioners are working to apply pressure [vaccination rates up] and I think it’s really disheartening to get comments like that from people who aren’t in the community to actually see the effort going on,” she said.

“So much blame has been laid on the community… it’s such a kick in the gut to say the least.”

Ms Fernandez-Brown, recently named NAIDOC Youth of the Year 2021, said she expected the community to go into lockdown after the virus was discovered.

She said there was confusion about the current health advice within the population of 800 and many residents had not yet been tested for the virus.

“We’re constantly being told, ‘We’d love to do this, but we don’t have the resources,'” she said.

“It’s scary and you feel alone and you don’t feel supported by the government right now.”

NT Health, already struggling with staff shortages, deployed a rapid response team in the early days of the outbreak, but on a smaller scale than previous remote outbreaks, where large teams were dispatched to test all residents and hundreds of COVID-positive people have been evacuated to quarantine facilities.

“This will be our approach going forward when it comes to communities,” he said.

As omicron cases continue to multiply in remote communities across the country, Dr. Agostino that the health measures should be carried out by the community.

“Throughout the pandemic, we have asked governments to listen to the local community,” he said.

“Where there is a community that feels it is in their best interest to go into lockdown, we would like the government to support it.”

What you need to know about the coronavirus:

Dispatchers and volunteer firefighters recover life-saving equipment in the snow, saving a patient’s life in minutes