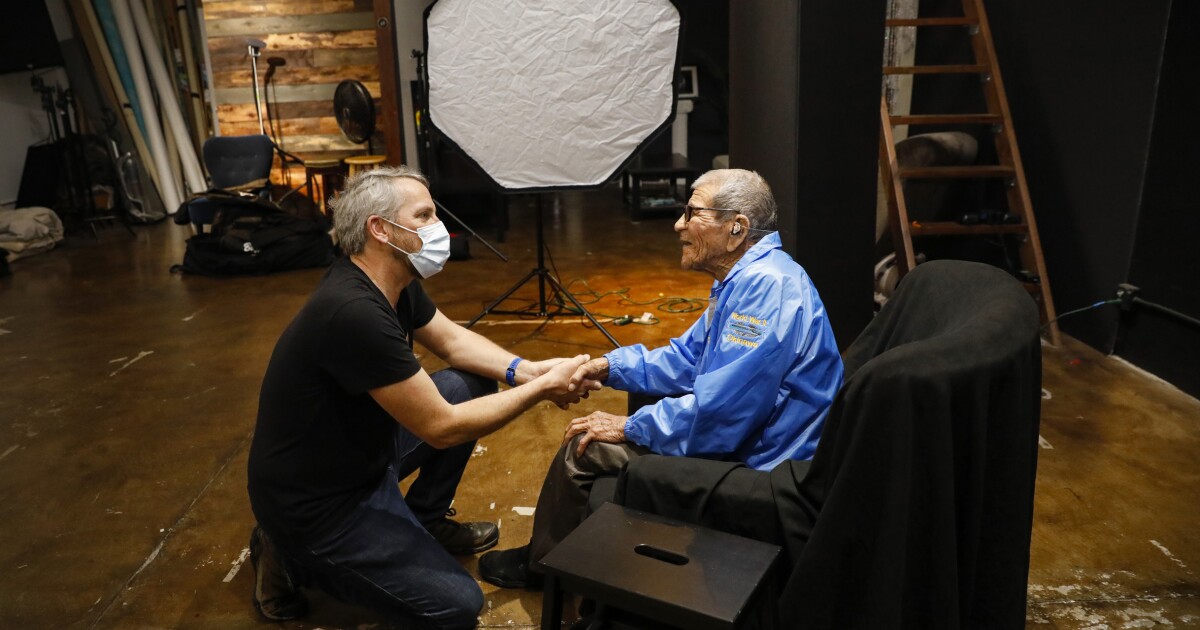 After retiring from a long career as a military photographer, Spring Valley resident Mickey Strand began looking for some personal photography projects to expand his portraiture skills. One of the subjects he encountered was a simple choice: photographing other local veterans who had served in World War II.

“Obviously, that was something I really cared about,” said Strand, 54, who spent 24 years in the Navy and retired in 2009 as senior chief of Navy Combat Camera Group Pacific.

Since July 2017, Strand has photographed more than 100 WWII veterans, photographing them and recording audio interviews of their wartime experiences, which he is translating into a brief written biography on the project’s website, veteransportrait.com. Strand said he was honored to hear these war stories and spend time photographing these heroic men and women. But the reality is that Strand is in a race against time.

Of the 106 World War II veterans he has photographed over the past five years, more than 100 have died. Many of them have been photographed at veterans’ homes and skilled nursing facilities throughout Southern California and are in the final months, if not weeks, of their lives. Capturing these portraits has become both a mission and an affair of the heart.

“What I think about when I do these sessions is that I might be the last one they tell their story to,” Strand said. “My goal is to leave a legacy. Every artist struggles with the work they will leave behind when they’re gone. I hope people can look at these portraits and say, ‘That was a lot of work.’ After my death I would like to know that.”

Strand’s most recent veteran photo session was March 10 with Joe Albert Gonzalez, 95, of Clairemont, who served in the Army’s 381st Company, 96th Infantry Division. He received a bronze star for his bravery at the Battle of Okinawa, when he leaped from a foxhole to save an end of an overturned stretcher containing a wounded soldier after one of the medics carrying the pallet was shot. Gonzalez helped get the wounded to safety through a hail of bullets.

For about 20 minutes, Strand sat with Gonzalez and asked him questions about his audio recording service. Gonzalez’s memories have faded over the years, but Strand was patient and cheerful. He’s learned to ask the same questions three or four ways, and eventually the veterans’ heads flex and the stories ooze out.

Gonzalez was born in San Diego and grew up in Logan Heights. When the war started, he was an amateur boxer fighting with a nasty left hook. He quickly volunteered to serve with three of his brothers.

“I didn’t want to be left out. Everyone else wanted to leave,” he told Strand during the interview.

Over the next 30 minutes, Strand snapped dozens of shots of Gonzalez, with his glasses on, then off, smiling and laughing, then serious. Lean back, then forward. With buttoned and unbuttoned jacket. Strand worked quickly, squeezing more than 100 digital images together with a handheld trigger connected to a stationary camera, and sometimes going up close for angled shots with a handheld camera.

Strand likes to use flash because it emphasizes the “smile lines” on veterans’ faces, and he photographs in color but converts the images to black and white for portraits.

The “magic” image during this shoot came at the end of the session when Gonzalez was mentally engaged but his body relaxed. His facial expression was natural and his eyes shone with happiness. As Strand held up the camera’s viewfinder for Gonzalez to see the last photo, he laughed in agreement and then asked for lunch.

His son and Army veteran Arnold Gonzalez said his father was looking forward to the photoshoot, which will likely be his last. On April 22, Joe Gonzales will be 96 years old. He has told his family he will not see 97. Because he survived the war with only minor injuries in the 96th Infantry Division, Gonzalez believes 96 is his lucky number. He doesn’t want to tempt fate by surviving.

Keep out of the way

Strand fell in love with photography as a boy and developed images with his father in the basement darkroom of their home in Racine, Wisconsin. He photographed for his high school newspaper and yearbook, then joined the Navy, where he served as a photographer on the ships USS Ranger and USS Long Beach, and Miramar Air Station. He later taught photography at the Defense Information School in Maryland.

Two years after retiring from the Navy, Strand had a fatal blow. After an appendectomy, he developed a fatal sepsis infection and struggled to recover for six months. This experience led him to appreciate the importance of celebrating life and capturing its essence in photographs.

Unfortunately, Strand’s mentor told him that “life” was the only thing missing from his early attempts at portraiture some six years ago.

“He told me my work was stagnant and not humane enough,” Strand said. “He told me that to let the person be the person and to find the moment, you have to step out of the way.”

As homework, Strand began researching subjects that interested him to make a series of portrait series. The first series was Behind the Cut, which captures both the hard and soft sides of the motorcycle club members. Bikers call their club vest “Cut”. A member of a motorcycle club himself, Strand hopes his more than 100 portraits will help improve the image of biker clubs, which he describes as a “maligned and misunderstood culture.”

His second major series was the Veterans Project. It began on July 25, 2017 with a full day of filming by 16 WWII vets at Mt. Miguel Covenant Village, an assisted living center in Spring Valley. The portraits were displayed at the center a few months later on Veterans Day. In the years since, he’s done similar recordings and shows at veterans’ homes in Chula Vista, Ventura, and Los Angeles. His largest exhibition was on Veterans Day 2019 when he hung 86 portraits at the Museum at the Photo Center in Palm Beach, Florida.

For the larger projects, Strand brings his wife along to help conduct the interviews. When dementia fades the expressions on the veterans’ faces, Strand often asks a family member or caregiver to stand behind the camera so he can capture the moment when the subject’s eyes light up in recognition. Sometimes he hands subjects a meaningful object, like a Bible or a camera, to evoke memories of something they love. Some motifs come to the shoot in their old uniforms, others in T-shirts. Many come with 75-year-old war photos of themselves.

Ten of the WWII veterans he photographed were women. One couple he photographed together were veterans Chuck and Annie Muler, who died within months of their double portrait being taken in 2018. Strand also photographed several Blacks who served in separate units during the war, including the late Noboru “Don” Seki, who lost his left arm in combat with the highly decorated Japan-US 442nd Regimental Combat Team, and Herbert Barnum, a sergeant of the Black Army, who served as a mechanic in a mobile unit in Germany, Belgium and France.

His most popular photo subject was Joe Renteria of Point Loma, who died in October at the age of 104. Renteria, a Cherokee who grew up in a Catholic orphanage, served as a top-secret Navy photographer during World War II, photographing enemy bases from the air and capturing images of the secret US atomic bomb tests at Bikini Atoll in 1946. He posed for Strand with the oversized camera used to capture these images.

“That was my #1 favorite shoot,” Strand said. “I loved how much of his character we captured in the photo.”

The #1 Best Vegetable for Weight Loss, Says Nutritionist – Eat This, Not That