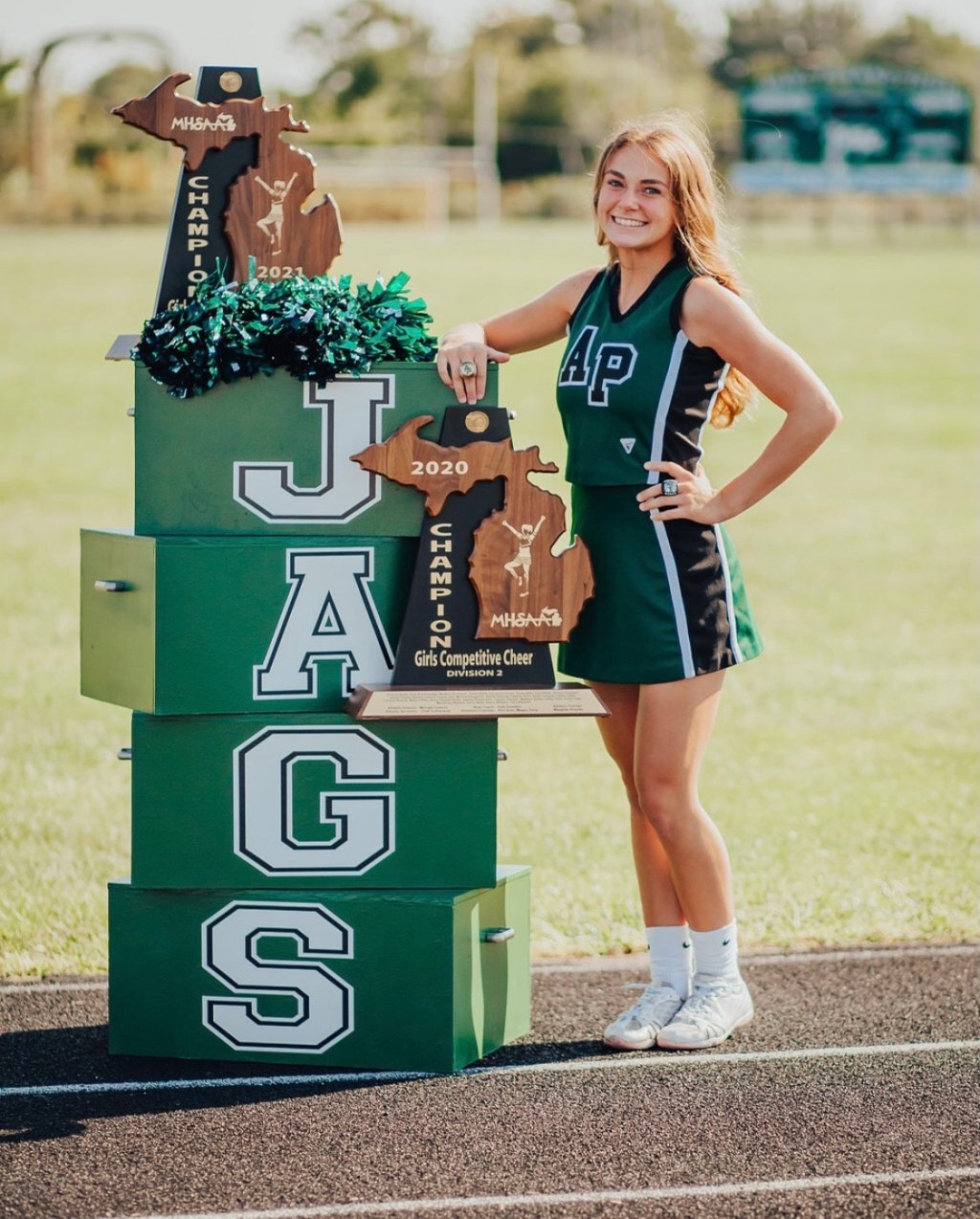 While there were smiles, tears, high-fives and hugs all over the mat at the DeltaPlex in Grand Rapids on a Saturday morning in March, Kuhn tried her best to take it all in and cherish the moment. Your Allen Park team had just won their third straight MHSAA Division 2 jubilee title – and once again they rose to the occasion to defeat some incredible teams.

But during the wild celebration, Kuhn quickly realized it was all over.

“It’s hard to find words to describe what it felt like to win the state championship,” said Kuhn. “When our name was last called I was immediately overwhelmed with so much joy and excitement. The whole experience felt so bittersweet as it was my final year of cheering as a Jaguar. I was extremely proud of each and every person on the team and was overjoyed to have had this experience with them.”

Like her fellow elders, this was Kuhn’s third straight state title. However, this one was something special.

“This season felt pretty perfect, for lack of a better word compared to the years before,” she said, finding the perfect word. “We were really lucky with minimal injuries and everyone did their part to keep themselves healthy throughout the season. It felt so rewarding to finish the season on top, especially for my senior year.”

Kuhn, a team captain, says competition in the States is “tough.” So what have the Jaguars done well to take them to the top and to the top?

“We did exactly what we had to do to get the job done,” she said.

They did exactly what Allen Park’s cheer program normally does, and Kuhn credits much of the success with preparing and then delivering when it came time to deliver.

“Allen Park’s celebration program has been so successful for a number of reasons – one of which is the great coaches,” she said. “Allen Park’s coaching staff is truly second to none. The importance of hard work, dedication and humility are taught to AP cheerleaders from a young age. This program undoubtedly builds on tradition.”

“She really is the glue that holds this program together and she has worked tirelessly with our other coaches to get the AP cheer to where it is today,” Kuhn said.

And Goodwin has plenty of praise for Kuhn, a four-year-old starter and starter for the last three seasons in all three rounds.

“Cass is an amazing athlete and young lady,” she said. “She has a great work ethic, is highly respected by her peers and has phenomenal leadership skills. It was an absolute pleasure coaching her and I will really miss her.”

Kuhn said she first became interested in cheering when she was very young. She went to her older brother’s junior soccer games and watched the cheerleaders on the sidelines.

“I knew right away that I wanted to cheer and I couldn’t wait until I was old enough,” she said. “As I began cheering for our city’s junior football program and gaining experience with other cheer teams, I quickly realized that I love the competitive side of the sport and cheering on the sidelines.”

Cassidy, 17, is the daughter of Natalie and Bill Kuhn. She has a GPA of 4122 (10th in her class) and is also a member of the National Honors Society and Link Crew. She enjoys spending time with her family and friends, playing with her dog Milo and of course exercise and fitness.

While she hasn’t made a final decision about college, she has decided that she wants to keep cheering on. “Whether that’s in competition or cheering on the sidelines, I’m not sure, but I know I’m not ready to give up the sport just yet,” she said. “I am very interested in a career in healthcare and science.”

Wherever she goes, she will have many special moments from her school days to remember.

“The memories I made with my teammates over the past four years will stay with me forever,” she said. “The wins have been great, but nothing compares to the bonds I’ve forged with my teammates and coaches. To be able to experience so many wonderful moments with the people who are so close to my heart is really a blessing. I am more than fortunate to have had the opportunity to be a part of APCC over the past four years.”